MARUI GROUP held a donation drive for offering relief to victims of Typhoon Hagibis that could be utilized at one of 26 stores nationwide or by using EPOS card points. This campaign ended on October 31, 2019.

Thanks to your kind support, we were able to collect a total of ¥1,628,183 in donations over the period of the campaign.

These donations were given to the Japanese Red Cross Society, where they were used to fund the relief effort in the impacted regions.

After providing initial disaster relief donations in the wake of the Great East Japan Earthquake, MARUI GROUP UNION and the MARUI GROUP Welfare Committee have continued to make donations every summer since the disaster to fund the activities of the Iwate Prefecture volunteer organization Tono Magokoro Net and to provide scholarships to students from Iwate who are pursuing higher education. Furthermore, we began offering human support shortly after the earthquake by dispatching officers to the disaster-stricken areas to support reconstruction through the Japan Federation of Service and Distributive Workers Unions, which was the body overseeing these activities at the time. We have also conducted ongoing volunteer activities since February 2012 by leveraging the attributes of MARUI GROUP's employee base, namely that it consists of a large number of women and that employees tend to be able to take part in such activities on weekdays and are skillful at providing customer service.

As the people living in temporary housing came from various regions, it can be difficult to foster the same level of social interaction and mutual support that was present in their previous communities. To address this issue, MARUI GROUP lends its aid to the activities of Tono Magokoro Net, an organization that has been supporting community building in disaster-stricken areas since the earthquake struck, to provide people in these new communities with opportunities to meet and enjoy talking with others by holding tea parties and craft-making gatherings. We are also contributing to various other activities for preventing residents from becoming isolated.

MARUI GROUP has been selling the unique stuffed cats*1 that were created at the aforementioned craft-making gatherings, one facet of these community building initiatives, at charity bazaars at Marui stores since February 2013. To date, customers have purchased more than 2,000 of these cats, which are made by encasing laundry clips in cotton and cloth so that the cats may double as clips.

*1 These stuffed cats are made in part by using materials harvested from clothing items that customers have traded in.

Donation boxes were set up in Marui and Modi stores nationwide over the 44-day period from April 18 to May 31, 2016, to collect disaster relief funds to support reconstruction from the 2016 Kumamoto earthquakes.

A total of ¥9,639,423 collected comprising donations at stores and from EPOS cardholders as well as a portion of the sales at special used item corners in Marui stores (from the period from April to June 2016) was donated to the Japanese Red Cross Society and World Vision Japan. These donations were used to fund humanitarian and other activities for supporting individuals affected by the disaster.

Furthermore, over the two-week period from April 6 to 20, 2017, roughly one year after the Kumamoto earthquakes, Hakata Marui participated in the Fukuoka × Kumamoto Kizuna Project aimed to express people's wishes for a fast recovery in the disaster-stricken areas. As part of its participation in this project, Hakata Marui held its own event for expressing its support for the people of Kumamoto Prefecture together with its customers.

MARUI GROUP's employee cafeterias participate in the TABLE FOR TWO (TFT) program*2 by providing TFT menu items. For each lunch ordered from among these items, ¥20 is donated through the program. Moreover, all TFT menu items are healthy, low-calorie meals (with less than 700 calories), and have thus proved incredibly popular among employees, especially given the rise in health awareness. In the fiscal year ended March 31, 2017, we helped provide 65,000 meals (equivalent to ¥1.3 million in donations) to children in developing countries. In recognition of these contributions, TABLE FOR TWO International has named MARUI GROUP as a platinum supporter and has sent the Company letters of appreciation for seven consecutive years.

*2 Through the TFT program, ¥20 is donated for each applicable meal or food item ordered to be used to supply school lunches to children in developing countries. The amount of ¥20 is equivalent to the cost of one school lunch in these countries, meaning that each meal ordered through the program in a developed country translates to one meal in a developing country. Donations collected from individuals participating in this program are used to provide school lunches for children in the supported regions. 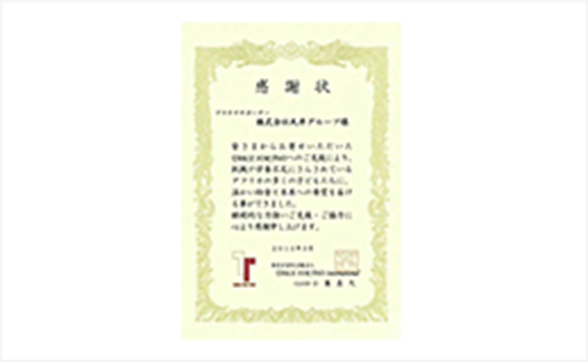 Letter of appreciation from TABLE FOR TWO International

Mt. Fuji National Trust is an organization that promotes tree planting and other greenification activities for preserving the nature and scenery of Mt. Fuji. The MARUI GROUP UNION and the MARUI GROUP Welfare Committee endorse the goals of these activities, and employees and their families have volunteered to take part in these tree planting activities since 1999. In addition, through environmental organizations, we also participate in environmental volunteer activities in other areas, such as the Shonan coast in Kanagawa Prefecture and the Suma coast in Hyogo Prefecture.

Marui store employees play a leading role in advancing activities for contributing to local communities. As customer needs diversify, environmental and social awareness is rising. It is therefore important for MARUI GROUP to remain perceptive of such social change and to address related needs. Our activities on this front are based on frameworks that enable employees to think about how they can serve their communities and then receive support from the Company in enacting those plans that can easily be put into action through their work or workplace. Going forward, we will continue to promote social contribution activities through our business activities and customer service while always considering customer needs.

Water sprinkling campaigns are held at Marui stores, specifically those in urban areas impacted by the urban heat island phenomenon. Community members and customers join us in these campaigns to share a refreshingly cool moment.

MARUI GROUP UNION and the MARUI GROUP Welfare Committee coordinate with the Japanese Red Cross Society to hold periodic blood drives at the workplace level in order to help supply blood, a precious resource for the medical field for which supply is lacking.