In February 2019, we announced MARUI GROUP's 2050 Vision, a roadmap for guiding our efforts to help build a flourishing and inclusive society that offers happiness to all.

Critical Importance of the Concept of Inclusion

MARUI GROUP envisions a world in which we have transcended all dichotomies to build a flourishing and inclusive society that offers happiness to all. A society cannot be said to be happy if happiness is only provided to certain groups. Only when happiness is available to all can society truly flourish.

Since its founding in 1931, MARUI GROUP has continued to evolve its unique business model merging retailing and finance to reflect the changes in the times and in customers, all the while being guided by the co-creation philosophy that "creditability should be built together with customers." Today, the concept of inclusion—integrating and including individuals that had previously been excluded—infuses our quest to help shape the future. We believe that expanding the intersection between the interests of all people through inclusion is a shortcut to the realization of a flourishing and inclusive society that offers happiness to all.

Inclusion is both a philosophy and a strategy, a key principle for transcending dichotomies to resolve social issues while increasing corporate value.

Dichotomies divide a single concept into two sides and presume inconsistency or opposition between these sides. People have a natural tendency to categorize people and assume differences based on dichotomies such as men and women and children and adults. These dichotomies can sometimes create discrimination and disparities in treatment when used to divide or foster opposition between groups, as seen in the dichotomies between the able-bodied and people with disabilities and between the rich and the poor. Our world is afflicted by countless such dichotomies, and we can no longer turn a blind eye to this issue. If we continue to ignore the global-scale problems we face, content to live focused on the happiness and interests that lie before us, we will create a new dichotomy, between current generations and future generations, and invite an undesirable future. 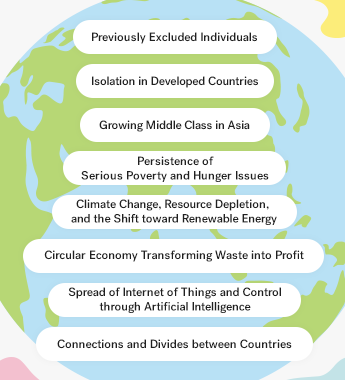 MARUI GROUP's Vision for The World of 2050

Understanding the current circumstances faced by the world, MARUI GROUP spent a year delving into the future that seems certain, the future that seems uncertain, and the future that, although seeming uncertain, is desirable to be made certain. We thereby are able to formulate a vision for the world of the future based on three predictions: the emergence of a focus on individuality that still values connections, the appearance of a massive global market catering to low- and middle-income individuals, and an increasing emphasis on businesses that coexist with the global environment. The vision for the world of 2050 arising from these three predictions is a world of interconnectivity between countries, races, and nature.